Cuyler Keating had two entries for 31 Days of CCS this year. First is an all-color autobiographical mini titled Light Left On. There are three brief stories that dip into comics-as-poetry territory. “March 19th, 2020” is a COVID/lockdown comic, the kind I’ve seen a lot of in comics form. The clever bit of imagery here was noting that the annual spring infestation of ladybugs was met with apathy. Keating then got a bit too on the nose, talking about the Trump administration and the lockout itself; this was understandable, but jarring, given the way she had set up the strip. 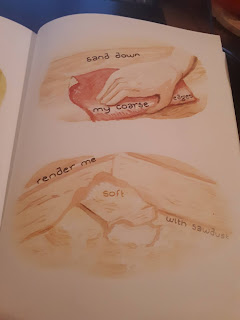 The other two stories, “Worn Down,” and “Room For The Road,” get at her overall aesthetic a little more directly. Written after moving into a remote farmhouse in Vermont, these comics mix word and image together seamlessly, vibrantly employing colored pencil to add contours, depth, and weight to the page. They’re about a lot of things all at once: the new house, the sense of distance, her husband, and her own attempts at embracing this new, rural lifestyle. This type of comic is a departure for Keating, and it was interesting to see her flex a different kind of comics muscle, even if she’s not completely comfortable with it as of yet. 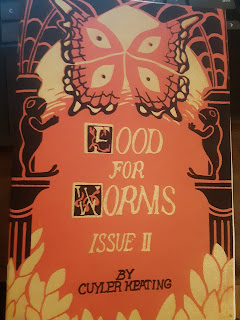 Returning to her wheelhouse, culturally subversive fantasy comics, Keating also submitted the second issue of Food For Worms. This is an epic about a society of anthropomorphic frogs living in a fearful time as a poisonous “miasma” surrounds their environs. (Even when not writing about the pandemic, Keating is writing about the pandemic.) The wild card here is a young human woman named Margeaux, who was discovered in the forest as a baby and raised by the ruler of the Font, a sort of holy religious order.

Keating is exploring a particular kind of intersection: an ancient theocracy in its crumbling decline, confronted by an existential threat. Margeaux is in the middle of all this, as she’s treated as a curiosity at best and a wage slave at worse. In the second issue, Keating starts to pull some narrative strings together, as Margeaux makes it clear that she wants to learn how to make the perfume that protects people from the toxic air of the miasma. Beyond that, her yearning is an ontological one; she wants to know all of the secrets of the frog people, in part because she has no real idea what she is. “What am I?” is as basic a question as it gets, and Margeaux faces not only opposition in understanding this, but a racist undercurrent that asks if she even deserves to live. It is othering painted with a broad brush, but I sense that Keating is going further than simply exploring that surface-level narrative. 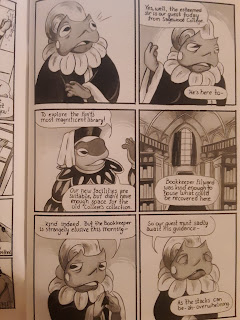 While the story fairly cries out for color (especially the scenes with stained-glass depictions of religious figures), Keating’s use of grayscale-shading is highly effective. Of course, none of that would work without her excellent character design. She truly understands how they frog people look, act, and move on a fundamental level. She’s able to render them in an entirely serious way, even if they look cute. This is part of the point, I believe; their own self-perception is utterly grave, because why wouldn’t it be? This marked the end of chapter 1 of the larger story, and Keating laid down a great deal of character development and a framework for the world. Now she’s going to ask the key question: what does the protagonist want? She wants to make the perfume, and she’s stolen a book that will let her do so. The rest of the story will no doubt follow from this, and I’m eager to see how it will play out.

DC’s Teased Resurrection of Alfred Pennyworth Is a Huge Mistake