Faith Cox’s comics stroll into comics-as-poetry territory a bit, especially with regard to how she uses prose. In Vermont Comic, she uses single-panel pages to illustrate her frustration with moving, with a lack of having a home space of her own. There’s a sense of living hand-to-mouth, of impermanence that’s palpable here. The images are sharp and simple and merge well with Cox’s hand lettering. It ends on a bit of a gag, but the sentiment is real. 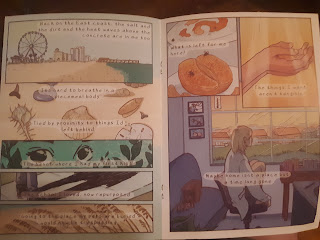 In Serotinous, Cox ruminates on place and its relationship to identity. She thinks of herself on the east coast, no longer connecting with it or her memories. She describes home as not a place but “a time long gone.” Home is a feeling more than a location, and it’s obvious the changes she went through and are still going through have left her restless. There’s a clever visual metaphor she uses in describing how the term serotiny refers to plants that bloom late. Some trees only bloom after extreme heat, waiting “for a spark to ignite.” For Cox, being a late bloomer is like being on fire. But this is a flame of rebirth, of forging something through destruction and heat. Both of these are a metaphor for an illustrator who’s just getting started with her career and prove to be an apt metaphor for where she stands in her process as an artist. While she’s skilled, these comics are almost a little too slick; you can see the illustrator in her covering up the rough edges. I’d like to see her get more raw on the page and indulge in first-line/best-line, and then return to her professional chops later.

Shadows of the Bat: Mariko Tamaki Previews the Upcoming Bat-Event