Kicking off another year of reviews of comics by alumni and current students of the Center for Cartoon Studies, let’s begin with a long-time favorite: Denis St. John. One of a few CCS alums specializing in horror and monsters, St. John has always brought a cartoony and playful edge to his work. His newest, Heart Of The Night Monster, is no exception. One of the things that makes his comics work is that while there are monsters and weird supernatural elements, they are always grounded in the foibles of his human characters. In this comic, the main character is a borderline-feral woman named Rowan. She’s obsessed with being in the forest but has no actual idea how to survive there. 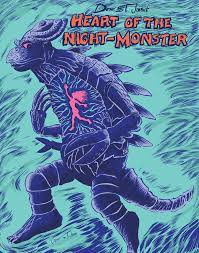 St. John has a way of stacking true weirdness on top of awkwardness. For example, after she’s seen shoplifting and biting the shopkeeper, she feeds some bread to a strange little monster. When the cops catch her, she sees the outline of a larger version of that creature above the forest. Rowan is mentally ill and totally unstable, but she is disinterested in living any kind of normal life and only wants to be in the forest. When she bolts from her treatment facility, she immediately heads for the woods. Once again, she has no clue or plan, and she is attacked and nearly suffocated by a tree with plastic bags. A monster emerges to save her, cutting her from the tree and dousing her in a river, melting the bags away. 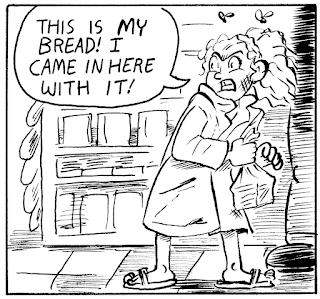 When found by the treatment facility, she’s soaking wet and has trash in her hair, but she’s sanguine about the whole experience. Her roommate, Elisa, demonstrates that she might be more than she seems. This wouldn’t be surprising, given her resemblance to certain characters from prior St. John comics. Rowan thought she looked like the hostess of a creature-feature program named Hella’Rella, and St. John stapled in a “secret comic” that was a mini printed on newsprint. It featured a hilariously exaggerated adventure where the horror hostess encounters a Scooby-Doo gang and systemically kills them in all kinds of cheesy ways. It’s a love letter to fun schlock. In this comic and the main story, St. John really excels with regard to character design. Bugged-out eyes and a certain rubbery quality in the characters’ limbs add to that sense of magical realism. This worked decently enough as a one-shot, but it feels like there will be more chapters of this. That’s fine by me, because this type of wandering narrative is St. John at his most interesting, as he introduces then contextualizes new elements. This is well-crafted and highly entertaining cheesy schlock that both celebrates and engages in the tropes that make this kind of horror fun.

7 Reasons Why WWE 2K22 Could Be a Success