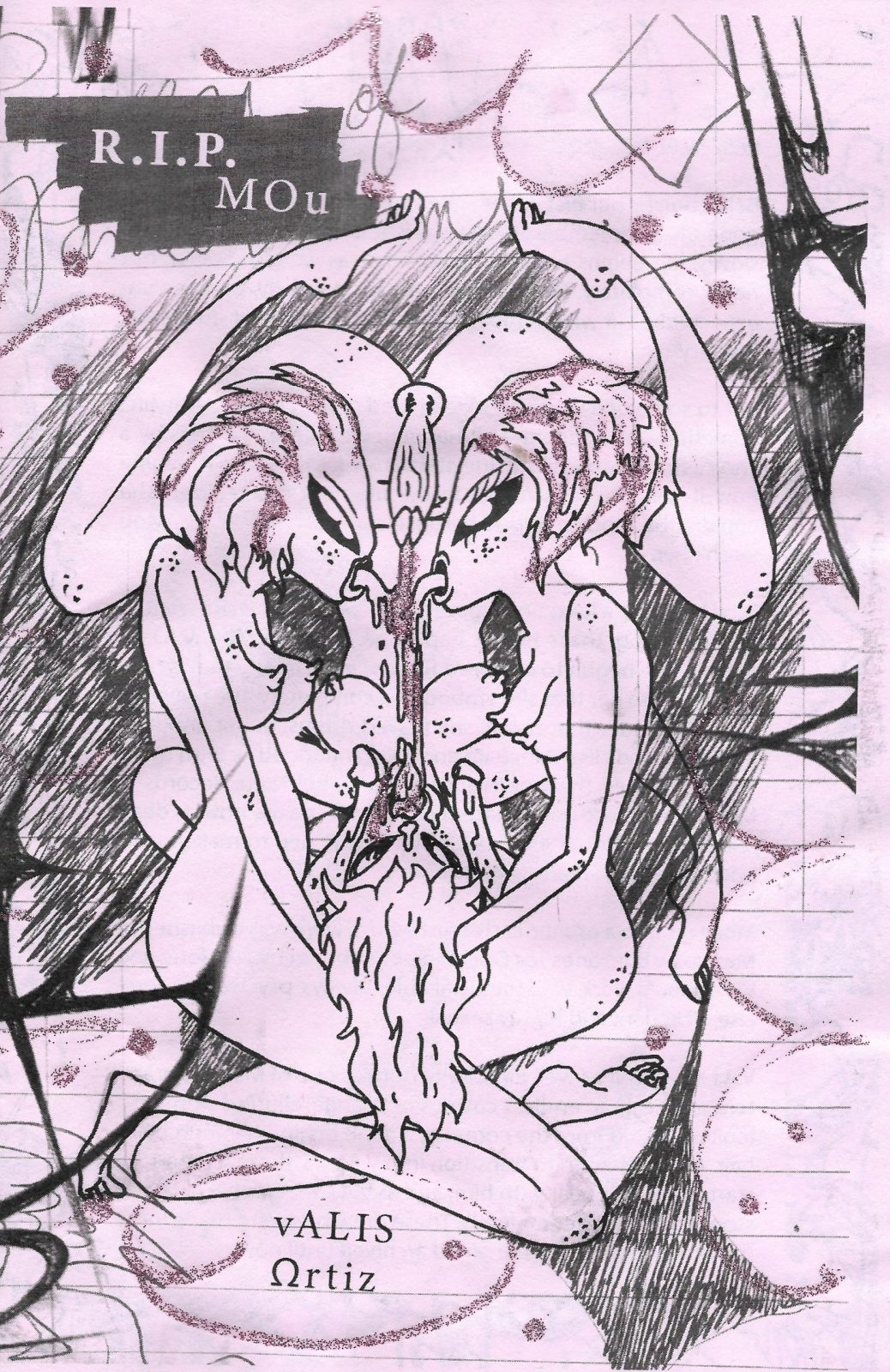 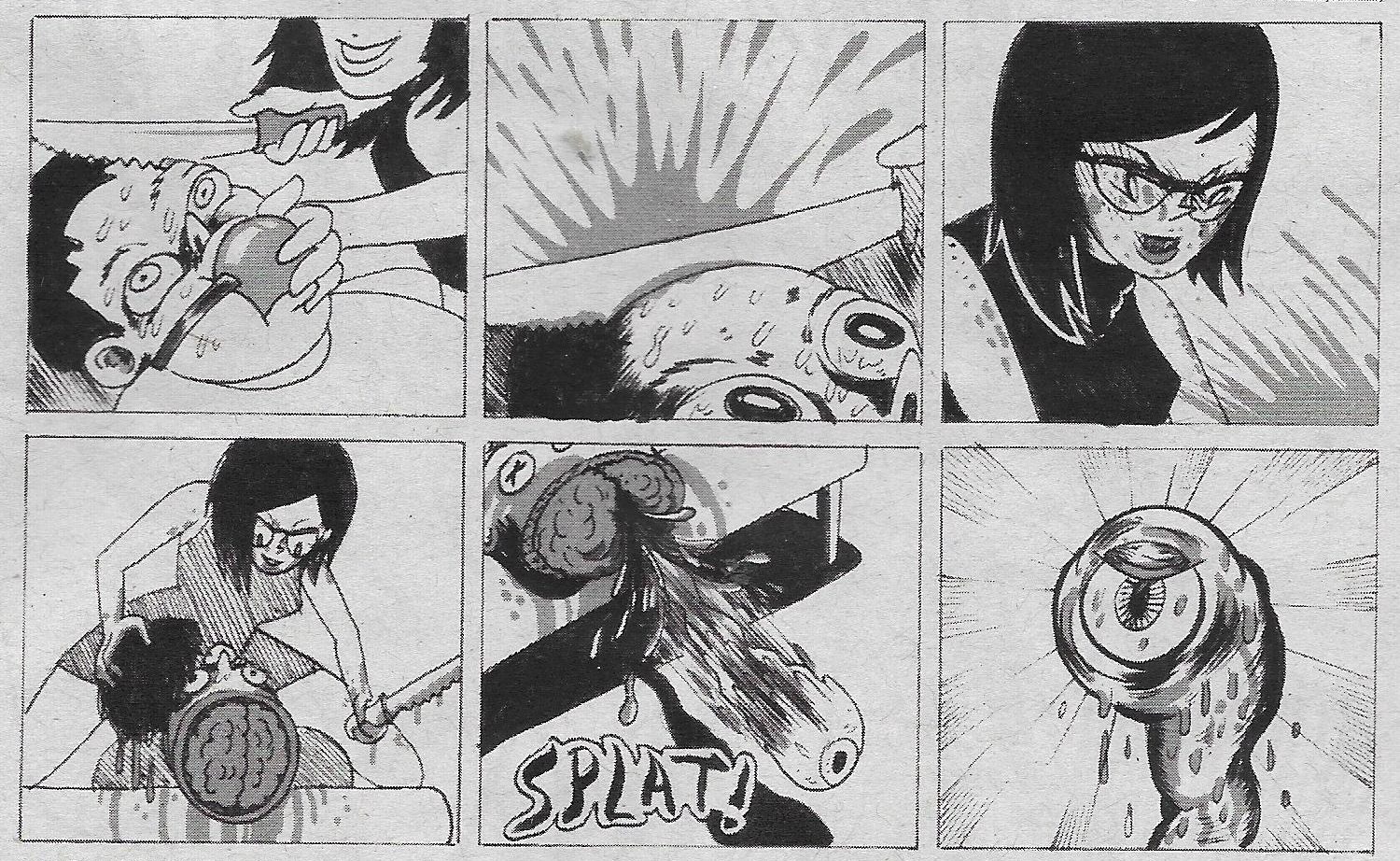 Mostly this is a drawing zine, with many pages of anime-looking characters hanging around doing hot girl shit: taking selfies; eating takeout food; going down on each other; getting tied up; smoking cigs; smashing people in the face with yonic fists. But 10 pages are fully finished comics, either in English or Spanish with English subtitles, and all of them depict the profound force of bodily change. Some of these stories take the form of slapstick – a little boy puts a lost tooth under his pillow, only for the tooth fairy to eat it up and piss on his head while he sleeps. Or, a cartoonist lays on his therapist’s couch, concerned about the meaning of his raunchy output – the therapist saws into his head to remove the offending part of his brain, only to find a living entity that she finds far more charming than the sad sack on the sofa. Broadly, these pieces are of a type with Lilin, in that they depict a powerful (if not supernatural) woman exacting some painful toll from male onlookers; whether or not this is pleasurable to the men is left to the reader’s own interpretation and/or predilections.

But V.A.L.I.S. modifies this approach in the zine’s longest comic, “Manos de alien”, which evokes Charles Burns in its rounded biological forms adrift in pools of solid black. A high school boy has a terrible habit of biting his fingernails – so extreme that one day he nibbles his fingers perfectly smooth. In a twist that would please the Gō Nagai of Hanappe Bazooka, this smoothness manifests an extraordinary sexual power in the boy’s fingers, making him the sex star of his school. But there is something else happening. Out of the opaque ink that is the sky of his world, a star forms, and out of it emerges an alien that declares a new form emerged from him, and his body catches fire as he beholds a new tendrilled self undulating before him. I think this is a universal experience. The solitude and ecstatic terror of understanding yourself as a desirable being; of anticipating the attention of others on your body, feeling that as a physical sensation. These private emotions, made manifest in stock genre transformations, are the erotic engine of this cartoonist’s work.

But some bodies remain forever in flux. Bhanu Pratap has been making comics for a little now—I recall seeing his 24-hour comic Crystalized mentioned on Zainab Akhtar’s old Comics&Cola site years ago—but Dear Mother has arrived with the force of an out-of-nowhere debut, so strong are its visual ideas. I think to some extent this work needs to speak for itself, so I hope I will be forgiven a longer-than-usual excerpt, from “Life Sentence”, one of five stories collected in these 52 pages. Depicting the fall of Lord Durma to Earth, I think this best encapsulates Pratap’s approach: 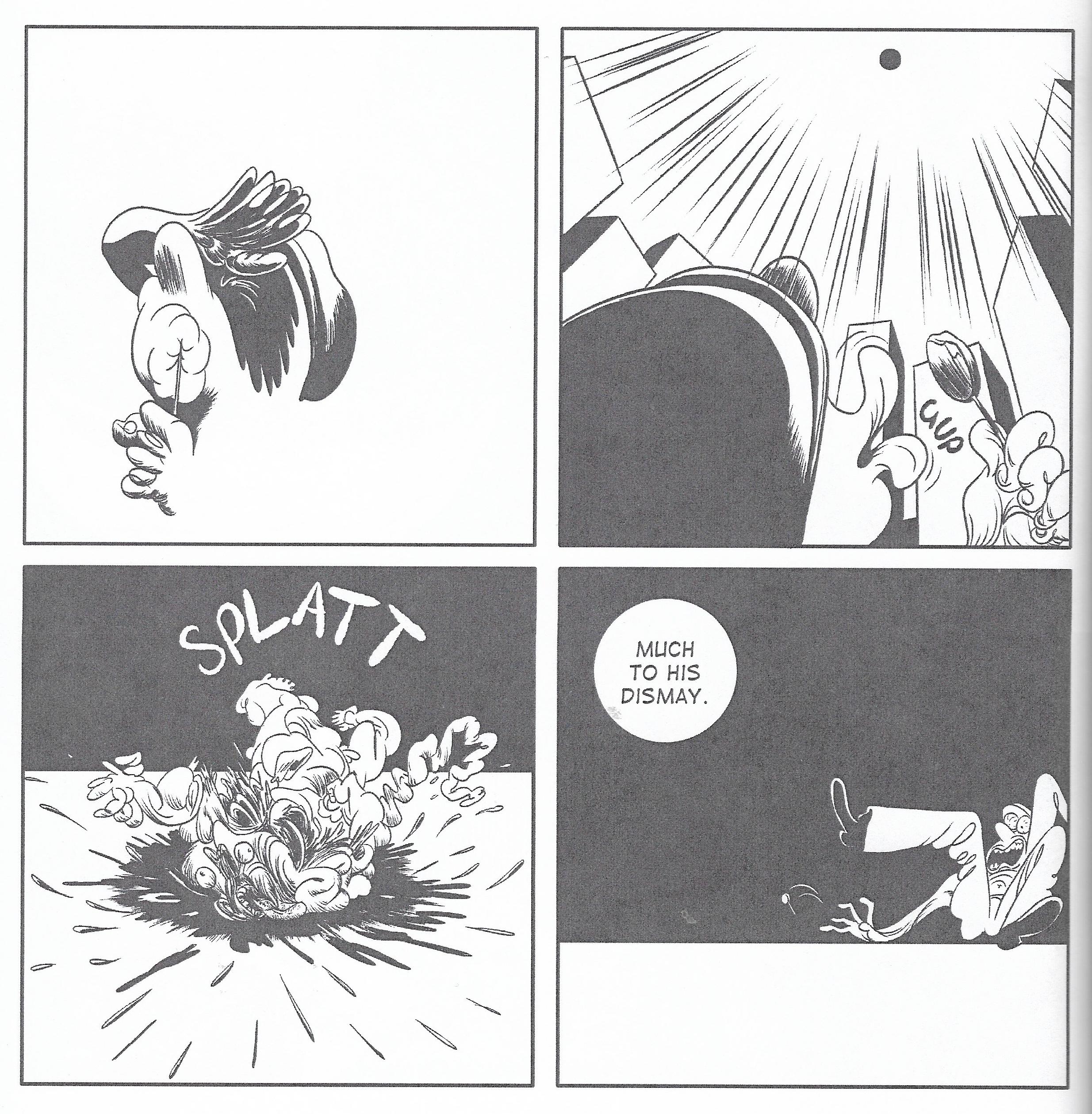 Emerging from an abstract heavenly swirl, we see a hand, a mouth, an eye – then an allegorical, ideal figure, and then a splatter of meat on the ground. Every human in the world of Dear Mother is created in this image, the contours of their form stretched like musical notes held alarmingly long. If I am not mistaken, Pratap has a background (or at least some practical experience) in animation, and his panels seem to catch his characters perpetually in the midst of a smear frame that a commercial work might use to liven the pace – but all of life in smear over here, which Pratap exploits for the purpose of sensuality and estrangement.

In “An Interrogation for a Man’s Body”, my favorite of these stories, a terrible bout of gas causes a man to die of farts, his ass cheeks flapping from the gale force; his lover comes home and cradles his ass, wailing “How did this happen?” Meanwhile, somewhere else—in shadows—a man slips on a banana peel, which sets off a running counterpoint of wordless disasters to the A-plot of the grieving woman binding her lover with ropes, his prick erect under the coil of hemp. “He died.” She is being interrogated by the police. “But his body, it stayed.” Eventually, the two storylines converge to rescue the woman from police custody, at which point they combine into a sort of fugue, where the gestures of the body and the antics of knockabout become a sense memory of somebody who is gone. 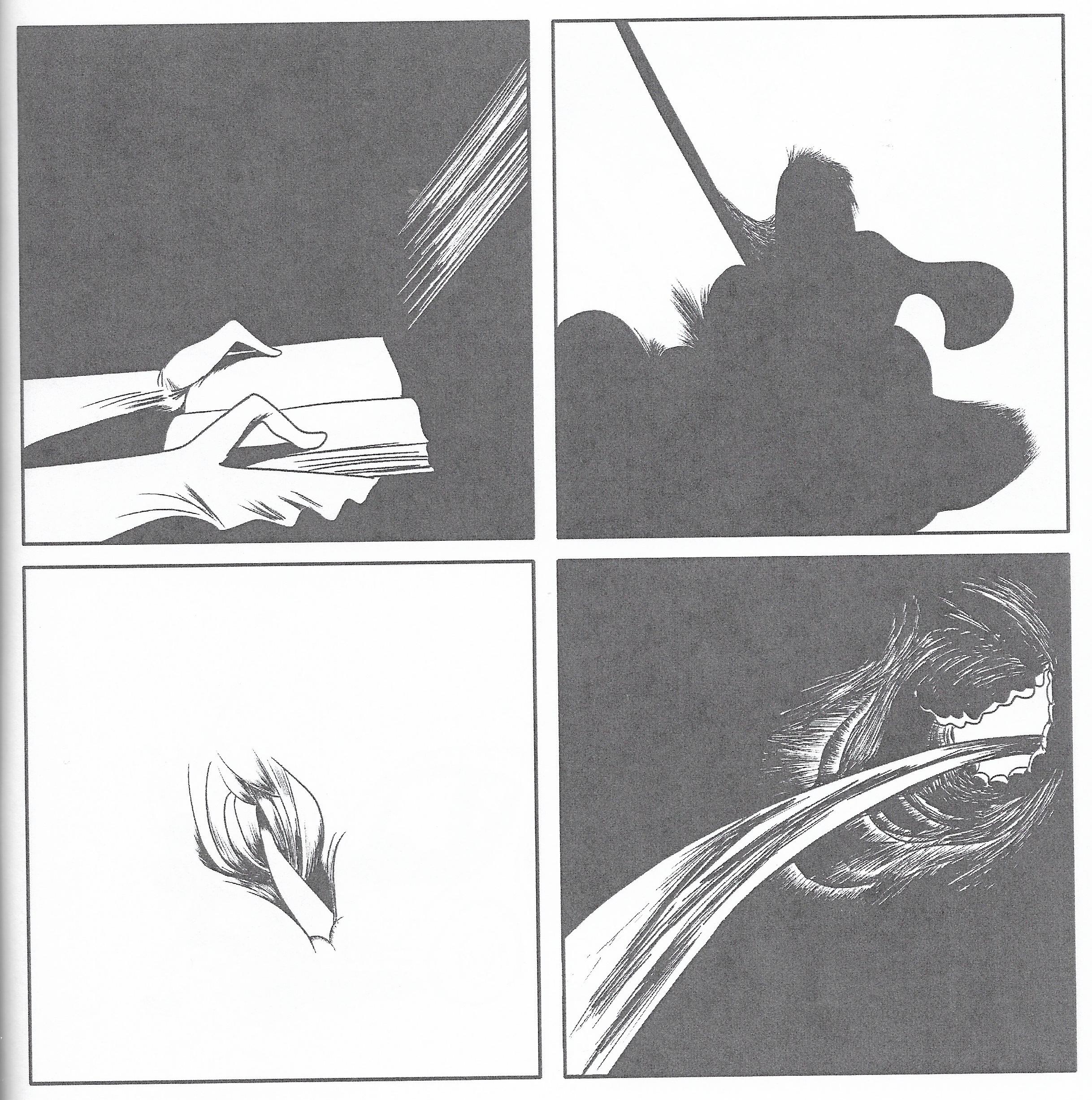 Crucial to Dear Mother is the breakdown of chronology, of panel sequence, whereby scenes (perhaps eras) seem to shift without warning; in this way, the constant stretching and rolling of flesh in Pratap’s art speaks not only to the present-sense impressions of the body, but also the body’s experience of time. The title story, “Dear Mother”, is the most traditionally-styled rendition of this theme. A young mother engages in sex work with an older man who forbids her direct touch; instead, she cracks eggs between her legs and allows him to suckle on her breasts. At home, the woman insists on breastfeeding her son, although he is probably too old – identifiable frequently by her large, protruding nipples, the woman conflates sexuality with nourishment, in the way the human body has simultaneously pleasurable and reproductive functions. Her john hates women for abandoning him – but then, perhaps he is really her son, unstuck in time, let loose to play alone on roadkill-festooned highways and tall, ominous bridges. Women suffer greatly in Pratap’s book, and rarely find any resolution; read as total allegory, the restless gasping of meat that is this artist’s technique for drawing people suggests a confusion of the body’s purpose, caught in a loop of pleasure and agony by the demands of life. 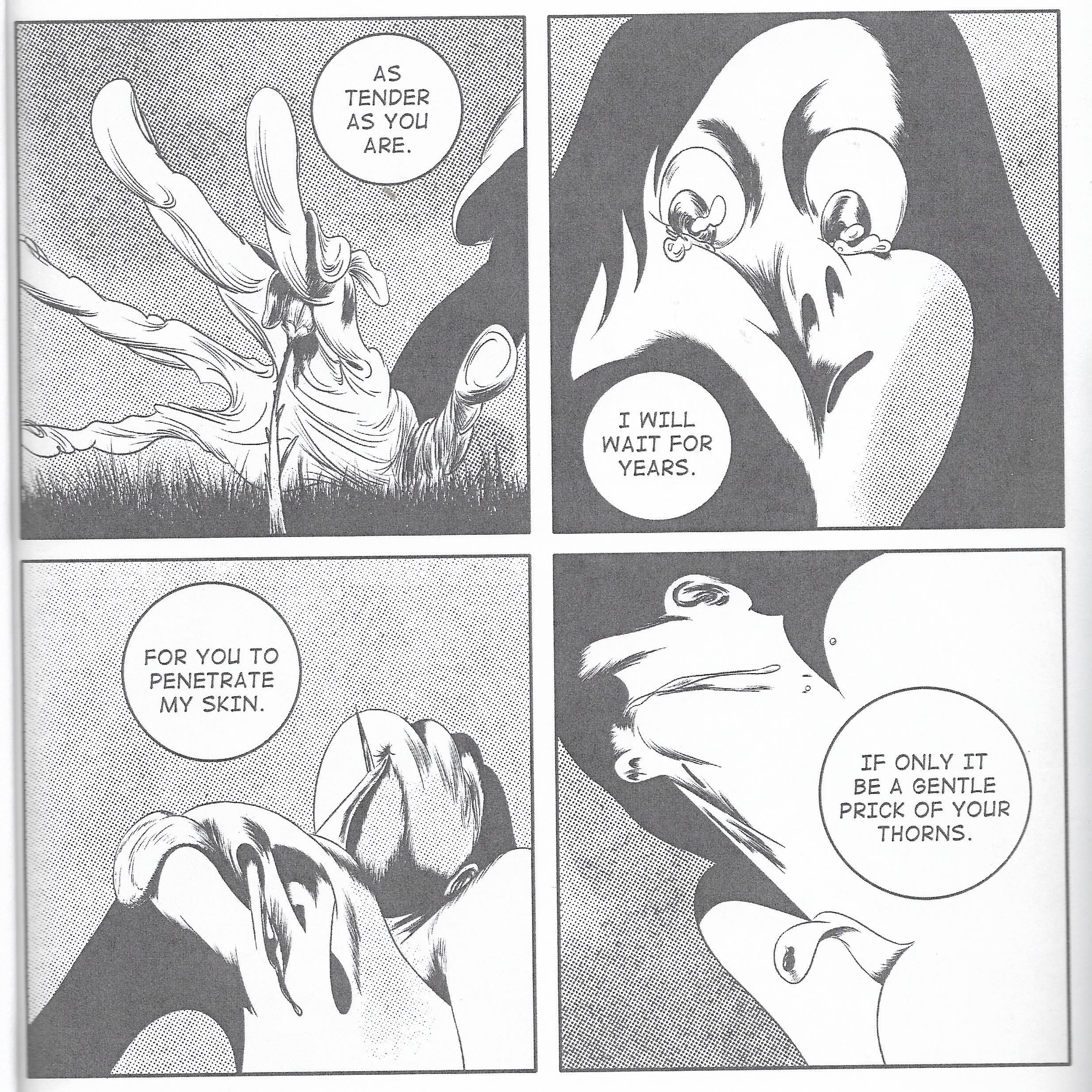 The lettering in these stories recalls the look you find in translations of prestigious gekiga, teasing out the commonalities between Pratap’s art and that of the Garo legends, perhaps most notably Seiichi Hayashi, in his own abrupt deviations from panel chronology and usage of wildly inconsistent character drawings. But in his best panels—I am thinking of the bottom-left, just above—Pratap recalls the great transgressive mangaka Keizo Miyanishi in his voluptuous curling of shadow on skin. And, there is a similar sense of annihilation waiting at the end of all this activity; that the only rest of Eros is in death. I pray this is not the end for Pratap, however – this book suggests a million ways in which he might develop.

The post 18+ Jamboree appeared first on The Comics Journal.